According to Aishat Alubankudi who shared this on Facebook, Hawa, 15, was employed 3 years ago by one Nafisa in Abuja. She was initially enrolled in a school but later withdrawn. The abuse started almost immediately and graduated into the use of objects.

This recent one was because of her lateness to feed her boss’ children. Nafisa, just came back from a trip and asked if the kids had eaten, to which she replied that she was getting them ready to bath before serving them food. 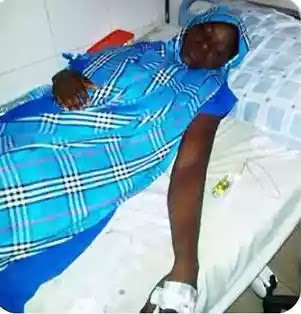 This got her upset and Nafisa started beating her. Hawa said that the instruction is the kids must bath before eating dinner but the kids don’t obey her once their mum isn’t around.

Nafisa and her younger sister, Ramatu, instructed Hawa to take of her clothes.

She was stark naked in the kids’ presence. Her sister held her down and Nafisa brought out a blade, slashed her and rubbed pepper on the wounds. Nafisa then grabbed her breasts and said she was going to slash them off.

That’s when she summoned courage to break free before help came. She was rushed to Garki hospital by concerned neighbors. She has now been discharged from the hospital and now recuperating at the house of a BCO member. Aishat said the police will charge Nafisa to court tomorrow.

One Reply to “HEARTLESSNESS: This woman’s cruelty towards her maid will bring you to tears(photo)”