Kendra Wilkinson‘s recent girls night out got way out of hand— and the reality star’s husband, Hank Baskett, will be shocked to learn about his wife’s wild, single behavior!

On Friday’s episode of Kendra On Top, the 29-year-old mother of two spots two hot men while relaxing in the pool of a luxury Hollywood hotel. But RadarOnline.com can exclusively reveal that the hunks were actually male escorts hired by Wilkinson for an explosive night on the town!

Both Randall and Jax are employed by high-end male escort site Cowboys4Angels, where the former is described as a “jack of all trades” perfect for an “intimate evening.”

For a night together, Randall— who immediately catches Wilkinson’s eye on the episode— charges a whopping $2,500 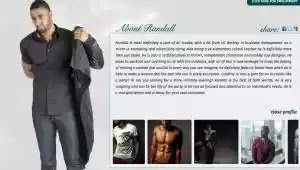 Later in the episode, Wilkinson and her girlfriends, including BFF Jessica Hart, meet up with Randall and Jax for a sexy dinner at Aventine in Hollywood. The men bring two more friends— who Radar can reveal are also Cowboys4Angels escorts!

Tommy is described as a “small town romantic” on the website, while Knox is called “a bit of a bad boy.”

On the show, the new friends later head to Hollywood club The Argyle, where they drink and dance the night away. The girl group allegedly exits the club together at 2:10 am, leaving the men behind.

But the evening, which sources say was filmed on August 25, was actually much more risqué than the cameras let on.

According to an eyewitness at the club, a tipsy Wilkinson was getting up close and personal with hired hunk Randall, 29.

“Kendra couldn’t keep her hands off him,” the onlooker reveals. “They even started making out!”

Though the pair didn’t go home together, another source claims, she looked like she didn’t want the night to end.

“Kendra was definitely not acting like a married woman,” the insider says.

It seems like the reality star was getting revenge on her 32-year-old hubby, who spent the night alone at home.

As Radar exclusively reported, Baskett hooked up with transsexual model Ava Sabrina London last year while his wife was pregnant with their daughter Alijah, now 1.