Professional boxer and a five-division world champion,Floyd Mayweather has retired from professional boxing undefeated also purchasing a brand new Buggati worth $3.5M.
According to his manager,Leonard Ellerbe the rumours of a comeback and a rematch with Manny Pacquiao or a bout with Amir Khan can not happen.
The announcement, made by Mayweather Promotions CEO Leonard Ellerbe on Monday, has put to bed any chance of a return to the ring for the undefeated champion, whose career included 49 wins.
Ellerbe made the claim on Twitter and tweeted: ‘Floyd Mayweather is RETIRED, end of discussion.’
There had been speculation Mayweather could make a comeback having hung up his gloves after beating Andre Berto at the MGM Grand in Las Vegas in September.
Meanwhile, Mayweather seems to be enjoying his retirement and showed off his new car on Monday night. 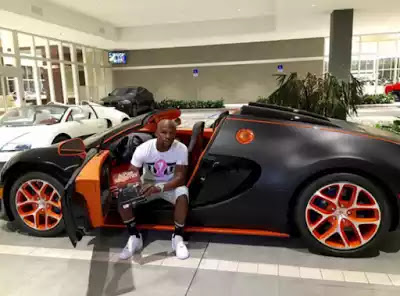 Purchasing a brand new Bugatti Veyron Grand Sport Vitesse, worth over $3m, the 38-year-old shared an image of his latest set of wheels on Instagram and said: ‘My new 2015 Bugatti Veyron Grand Sport Vitesse $3,498,000.’
Last week, Mayweather was courtside at the Staples Center to watch NBA as the Los Angeles Clippers defeated the Golden State Warriors 135-90 in a pre-season clash.
CLICK HERE  to like us on Facebook