rown University’s campus newspaper has apologized to Malia Obama after students posted on social media that she was partying during a college visit.
A photo that circulated online allegedly shows the president’s daughter standing next to a table with cups at an October 10 party. People who say they attended wrote on Twitter that Malia played beer pong.
A story about the tweets said Brown students had ‘no chill’ because they didn’t leave her alone during the visit.

Malia did not choose to grow up in the White House, and it is unfair that everything she does at just 17 years old is subject to such harsh scrutiny. 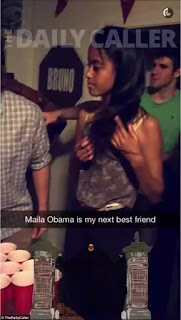 ‘It is a shame that Malia was unable to visit Brown and enjoy herself at a party without several news headlines coming out about it the next day.
‘While it is understandable that so many students were excited about her visit, it is likely that few of us would enjoy having strangers take pictures of us while we were unaware and post them on the Internet.
Well that is what you see if you grow up in the white house.