The Top Five actor, writer and director shared an image from Someecards of a drawing of an older man getting yelled at by his wife emblazoned with the text: ‘Here’s to Lamar Odom on being the first guy in history to have coke and hookers save his marriage.’
Below is the tweet.. 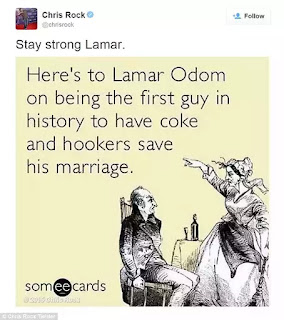 He captioned the image from the free online e-cards service which usually parodies sentiments found on regular greeting cards to his 3.59million followers with the caption: ‘Stay strong Lamar.’

Several of his fans saw the tweet as cruel as one even wrote to him: ‘Chris I like u but am disappointed n u 4 this joke about Lamar. The man is still ncritical condition. Have some (heart emoji) Chris #notcool.’
The controveresial tweet came days after Chris has been billed to perform in the forthcoming Oscars award which is billed to hold on 28 February in Dolby theatre London.

One Reply to “Chris Rock jokes about lamar’s condition… Though funny,but didn’t go down with some fans (tweets shots)”