Virgin Mary’ has reportedly appeared on the freshly-painted living room wall of a family in Coahuila, Mexico. 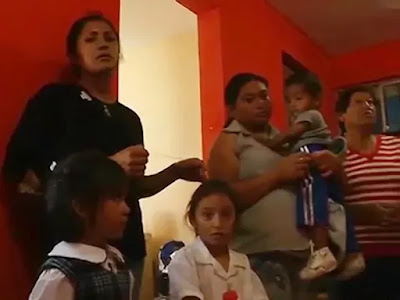 The image appeared on a freshly painted wall.
Devout Catholics have been flocking to the family’s home, amid claims that the image bears a resemblance to the Virgin of Guadalupe, an iconic picture housed in the Basilica of Our Lady of Guadalupe, in Mexico City, Mexico.
The basilica holds the record of the most visited Catholic pilgrimage site in the world, and the world’s third most-visited sacred landmark.
Mirror UK reports that the image appeared in the home of Luis Alberto Montelongo Reyes, in the Loma Linda area of Saltillo, a town in Coahuila city.
Many said they could feel the holy presence as they entered the house situated at the Loma Linda of Saltillo
Witnesses claim that the silhouette of a woman, said to be the Virgin of Guadalupe (Virgin Mary) appeared after the wall had been painted bright orange.
Residents within the impoverished district believe it is a “miracle” and a sign from God their poverty will be alleviated.
Many of those who visited could be seen lighting candles and stroking the image, asking for benediction and hoping for a blessing.
Lupita Trevino who visited the site said that as soon as she entered the house she felt a shiver through her body, adding that afterwards she turned up to pray for help with dealing with the pain of a bad back. 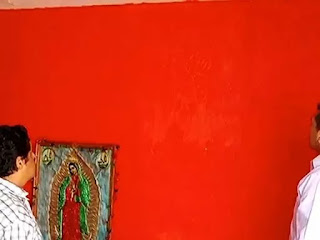 The image was said to bear a resemblance to the Virgin of Guadalupe.
Lupita said: “When I saw her on the wall I felt very emotional. I wanted to shout but I contained myself.
“I have always been a believer of the Virgin and now that she is here in our neighbourhood, she gives us hope that things can get better.
Mr Montelongo, the householder, said he had an open door policy which entails that anyone could come to see the image.
He stressed that for him, the rare occurrence was a blessing from God.
Meanwhile, Christians have been flocking to a village where a clergyman allegedly photographed an unusual phenomenon having a strong semblance to the silhouette of the mother of God flying above a forest which was being devastated by fire.