An off-duty police officer died after being shot as he was leaving for work in Cordova, Tennessee on Sunday.
Memphis Police officer Terence Oldridge died after being shot multiple times on Sunday
The victim, Memphis Police officer Terence Oldridge, was shot multiple times and was transported to Regional Medical Center in critical condition following the shooting, but died shortly after.
The 32-year-old officer had only been on the force since September 2014 and was working at Airways Station after graduating from Memphis Police Department’s 118th recruiting class.
Memphis Police Director Toney Armstrong said during a press conference that a call came in around 1pm about a shooting at a home in the Memphis suburb of Cordova. 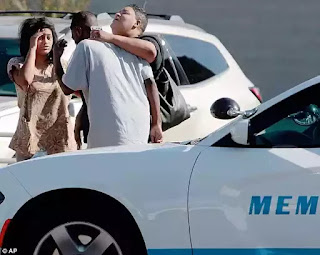 Armstrong said that a male suspect is in custody, but did not say whether the person has been charged.
He explained that the investigation is ongoing and the ‘details are very very sketchy.’
Jerry Kelly, Oldridge’s uncle, said that the officer was in his uniform and on his way to work when he was shot in his car.
‘We just got a call, told us he’d been shot on his way to work, that he made his way back to the door some kind of way,’ Kelly told WHBQ.
‘I don’t know exactly how he made it back, but made it back to the garage door.