Britain’s most shameless woman has sunk to a new low – by having an abortion after ­surgeons refused her a nose job while she was ­pregnant.

A series of doctors had told her the cosmetic surgery was too risky.

Josie, who terminated the unplanned pregnancy at 12 weeks, told the Sunday People:

“I’m having this nose job no matter what gets in my way. Pregnancy was a major
obstacle and an abortion was the answer to it – so that’s what I did. Anyone who criticises me for putting my looks ahead of an unborn child has no right until they’re the ones putting food on the table for my kids.
I don’t care what anyone thinks. My body, my decision.”
The mum of three from Leeds went on:
“I put my life on hold for my other kids. But now is my chance to get the looks I need so I can have the ­career I always wanted. And I’ll love the money.” 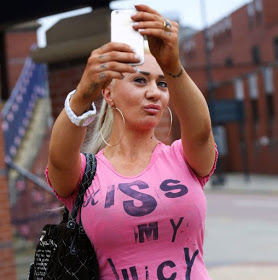 Scrounging Josie , who has worked as an escort, was ­already a ­national hate figure after a string of shocking antics.

She had a £4,800 boob job and botox on the NHS, smoked and boozed while pregnant and ­admitted she had planned to abort her youngest child ­because she had a chance of going on Big Brother.

Public outrage led to her cancelling the abortion in April last year and keeping baby Grace, who is now one.

But Josie, 25, has now gone through with her threat to sacrifice a child in pursuit of money after becoming ­pregnant for a fourth time.

All her pregnancies have been with different men. 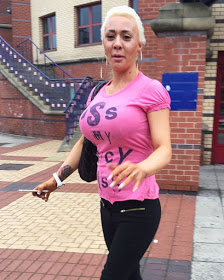 She said:
It’s not like I planned this. I was seeing someone I liked and got a bit brutal in the bedroom. We did use a condom but it split.
“I was meant to take the morning after pill but I had a photoshoot the following morning and didn’t get a chance to run into a pharmacy.
“I thought I was safe and sometimes you have to put your career first.”
Then found she was expecting by someone else – but ­remained ­focused on launching a ­career as a raunchy model.

She said:
“I had already booked a consultation at a cosmetic surgery company before I found out I was pregnant.
“I’d had the boobs done, I had the body. But I realised that to be really successful in the adult industry I needed the face too. I was excited about getting the nose I’ve always wanted. Mine is too wide and too round at the end.
When I found I was pregnant I told the dad and he was really happy. But I was already thinking about the effect having another baby would have on my plans. I want to do glamour and some more adult work, like porn films. That is hard when you’re ­pregnant or have just had a baby.
I spoke to the advisor at the ­cosmetic surgery clinic three weeks ago and she was telling me about the different kinds of surgery. I was getting really excited. But when I mentioned I was pregnant she immediately said the surgeon wouldn’t operate on me.
I was told it could harm the baby and they even recommend waiting a year even after I gave birth before having it done. I called a few other clinics and they all said the same. My heart sank but I knew what I had to do.
People can hate me – but the pregnancy was ­going to ruin my chance of finally making it. I’d been planning and saving for this surgery and nothing was going to get in my way.
I’m not stupid enough to think I’m model material right now – but with a nose job I can have the ­career I dream of. Of course it’s bad timing and I am sad. But I’d have been more sad if I couldn’t carry out my plans.
Next year I’ll be posing for glamour shots instead of nine months pregnant lying on the sofa with fat ankles. That’s my decision and no one else’s.”
Josie added:
“I love sex. I love money. I love my kids. The nose job will give me confidence to earn money to make my kids happy by doing something I love. I have no regrets.”

2 Replies to “HEIGHT OF STUPIDITY: Meet British Woman who terminated her 4 months pregnancy just to have a nose job.”