Nollywood actor, Jim Iyke has described his baby mama as ‘ultra private’. It even took everyone as a surprise when out of the blues, she was thrust into the public eye after the birth of his son.
I’m pretty sure since then we have all been wondering who she is, so here are some things many people don’t know about her.
1. According to the African Eye, the blonde beauty’s path first crossed that of the actor about a year ago.
2. Dana hails from the European country of Lithuania (part of former USSR)
3. She lives the capital city of Vilnus but hails from Kaunas, the second-largest city.
4. She is fluent in native Lithuanian, English and French
5. Dana is a graduate of Law.
6. She is sixteen years younger than Jim Iyke. She is 23 years old to be precise.
7. At the time when Dana met her actor, she never knew that he was a Nigerian famous actor.
8. Dana has been living with Jim Iyke as a couple in his apartment in Atlanta, US since her second trimester.
9. She is very private and camera shy, that’s why she avoids publicity as much as possible. Her actor boyfriend is the public one by virtue of his occupation. 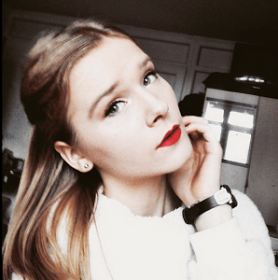 One Reply to “UNVEILING DANA KINDURYTE: What you must know about Jim iyke's baby mama”