An Asian family who converted to Christianity claim they are being driven out of their home for the second time by Muslim persecutors.
Nissar Hussain, his wife Kubra and their six children said they have suffered an appalling ordeal at the hands of neighbours who regard them as blasphemers.
They claim they are effectively prisoners in their own home after being attacked in the street, having their car windscreens repeatedly smashed and eggs thrown at their windows.
Mr Hussain, 49, has even given up his career as a nurse due to the effect on his health.
Police have been called numerous times to deal with the trouble but are said to be reluctant to treat the problem as a religious hate crime. Cruelty at home: They are attacked in the streets, their car windows are smashed (pictured) and their home is pelted with eggs

In plain sight: Police have been called to deal with the trouble but are said to be reluctant to treat the problem as a religious hate crime.

Only one successful prosecution has been made, and Mr Hussain said he feels so let down by police he has lodged a complaint with the Independent Police Complaints Commission.
He also criticised the Anglican Church for failing to provide any meaningful support.
Now the family are likely to move from their home city of Bradford to a ‘white English’ area to escape the hate campaign.
‘Our lives have been sabotaged and this shouldn’t happen in the United Kingdom,’ said Mr Hussain.
‘We live in a free democratic society and what they are doing to us is abhorrent.’
The Daily Mail first reported the family’s ordeal in 2005 when they accused Muslims of a campaign of ethnic cleansing against them.
A year later they moved to a different part of Bradford to start again.
Neighbours welcomed them into the community and all was well until Mr Hussain took part in a Channel 4 Dispatches TV documentary about the mistreatment of Muslim converts, which was screened in 2008. Origins: The problems started when Mr Hussain took part in a Channel 4 Dispatches TV documentary about the mistreatment of Muslim converts, which aired in 2008 Violence: Over the last year, Mr Hussain has had his car windscreen (pictured) smashed six times at a cost of £5,000 Targets: Broken glass lies in the passenger seat of Nissar Hussain’s car outside his home

They were recognised by a large Muslim family of seven brothers and four sisters living on the same street and were immediately ostracised.
The younger children from both families attended the local Church of England primary school, where a majority of pupils were Muslims of Pakistani heritage, but car sharing trips were soon stopped by the other family.
Mr Hussain said ‘word was spread around the playground’ about them being Christian converts and their youngest daughter was bullied.
Youngest daughter Leena, now 14, was told by her friends ‘our parents say we mustn’t mix with you because you are a convert.’ Mr Hussain said: ‘She was heartbroken and made to feel like a second class citizen.’
Mr Hussain said his wife, 45, and children Issar, 23, Anniesa, 21, Sarah, 19, Miriam, 17, Leena and Isaaq, seven, have faced harassment and abuse on almost a daily basis.
The family were denounced as ‘apostates’ – a term used for those who renounce a religion for another – which in some hardline Islamic countries is punishable with death.
Flashpoints include an incident in March this year when Mr Hussain ended up grappling with a man who ‘threatened and confronted’ his wife.
Police were called and Mr Hussain was arrested and spent 12 hours in police cells before being released without charges

Abuse: Mr Hussain insisted he has never been violent towards his tormentors, even though they continuously attack his car (pictured)

Over the last year, Mr Hussain has had his car windscreen smashed six times at a cost of £5,000. His eldest son, a final year medical student, has also had his windscreen smashed.
A neighbour was convicted at Bradford Crown Court of a public order offence and bound over to keep the peace after one of Mr Hussain’s children recorded him on a mobile phone making threats in a furious rage in the street.
Mr Hussain insisted he has never been violent towards his tormentors but he was given a police caution for an incident last year when he lost his temper and made an abusive comment in response to a threat from the man.
Mr Hussain had worked as a hospital nurse but was diagnosed with depression and post-traumatic stress disorder and has been unable to work. He owns several properties and now lives off rental income. 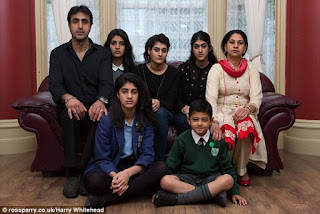 Although their faith remains strong, Mr and Mrs Hussain no longer attend church. ‘We have given up on the Church of England, they have done nothing for us,’ said Mr Hussain.

A meeting, arranged by a friend, with a local imam – who ‘listened and promised to help’ – also led to nothing, said Mr Hussain.
A West Yorkshire Police spokesman said: ‘We are aware of an ongoing matter involving Mr Hussain and are working closely with partners to resolve this situation. All reports of crime are taken seriously and are investigated thoroughly.’