Over the weekend it was revealed the tragic cause of death of the late Whitney Houston and Bobby Brown’s daughter has been determined –
But a judge has ordered the medical examiner not to reveal all to the public because of the ongoing criminal investigation.
Bobby Brown is hopeful of “criminal action soon” after the cause of Bobbi Kristina’s death was finally determined.
The singer – whose daughter Bobbi-Kristina Brown passed away in July after six months in a coma – claims the 22-year-old aspiring actress’ boyfriend Nick Gordon could be to blame for her death.
Bobbi Kristina and Nick Gordon
Shortly after Bobby released statement released through his lawyer which said: “In regards to the civil litigation, we believe we know who harmed Bobbi Kristina Brown and his name is Nick Gordon.” 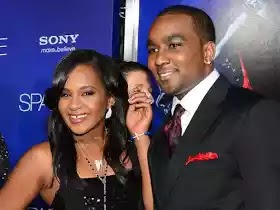 Hinting that domestic violence may have had a hand in his daughter’s untimely death, Bobby, who had  previously revealed he would be setting up a centre to help women affected by domestic violence in memory of Bobbi Kristina, said “it’s a place that I’m building – that we’re just starting to build – that I feel is needed. Because if I could have been there two days before anything happened to my daughter, it wouldn’t have went down like that.”