There were chaotic scenes in the Japanese parliament yesterday as politicians punched, pushed and shoved one another during the hearing of a bill that could see the country abandon 70 years of pacifism. Opposition lawmakers piled on top of one another during the mass brawl, with some trying to grab the committee chairman’s microphone to prevent him calling a vote on the controversial bill.
If passed, the bill will allow Japanese troops to defend their allies oversees even if Japan itself isn’t under attack. Currently article nine of Japan’s constitution – which came into force after the Second World War – outlaws war as a means to settle international disputes involving the state. See more pics of the grown men fighting after the cut. 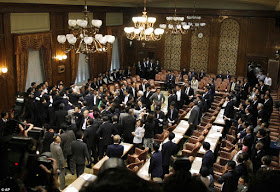 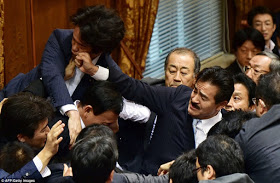 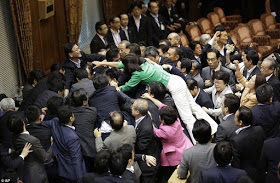 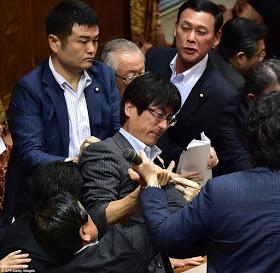