INEC Deputy Director says only 293,072 voters accredited
It is revelations galore at Rivers State election petition tribunal as the Nigeria Police revealed at the sitting in Abuja that agents of the Peoples Democratic Party (PDP) were caught openly thumb-printing in a house opposite their party’s secretariat.
A Superintendent of Police, Mr Tafa Michael, appeared before the tribunal.
Another Senior Police Officer said: At the field in front of the Area Commander’s Office in Bori, we saw people thumb-printing. I went to the Area Commander’s Office, surprisingly, I met the E.O. with him. I reported to him what was happening outside but he said I should mind my business.
Michael said he was on election duty on April 11 in Tai Local Government Area. The police officer told the Justice Suleman Ambrosa-led tribunal that over 70 persons, including PDP agents, INEC workers and ad hoc staff as well as other individuals were arrested by his men shortly after noon on election day.
Michael said materials, such as card readers, ballot papers, vests and ink pads were among items recovered from them, which was eventually handed over to the Criminal Investigation Department (CID).
He said: “About 12.45 pm, I was sitting at INEC office when I got a distress call that people were thumb-printing at Seme area. I went to the place after asking questions from people on the road. I was eventually directed to the place after sometime. When I got to Seme, I stopped close to PDP secretariat and asked again. I was informed that the house opposite the PDP secretariat had many people with electoral materials.
“I then came down with my men, cordoned the compound and in the process of doing that, I sighted the patrol vehicle of the anti-terrorism squad. I beckoned on them to stop, which they did and I informed them that I needed assistance.
“They joined us (my men and I). We entered the compound where we met people thumb-printing on electoral materials. We arrested them. At that point, I called my superior commander and told him the situation. He came down with a lorry with which we evacuated the people and materials to our base in Tai. I took some photographs before leaving the place.”
Michael deposited photo evidence to the tribunal.
It also emerged that only 293,072 voters were accredited for the governorship poll in Rivers:
INEC’s Deputy Director on Information Communication Technology (ICT) Mrs. Abimbola Oladunjoye told the tribunal that the electoral commission’s initial figure of 1,029, 102 was wrong.
Oladunjoye showed the data after persistent questioning by counsel to the petitioner, Mr Akinlolu Olujimi (SAN).
The respondents’ lawyers, including Onyechi Ikpeazu (INEC), Emmanue Okala (for Governor Nyesom Wike) and Chris Uche (for PDP), tried to discourage the witness from disclosing the information which, according to them, was in the document presented to the Justice Ambrosa.
Oladunjoye, who is also INEC’s head of Data Management Unit, explained that the information gathered from card readers were periodically uploaded to the central server of the commission automatically.
“I am aware that the commission took a decision that the smart card reader should be used for accreditation on governorship election.
“On election day, voters are supposed to come to the polling unit with their voter cards. The Incident Form is issued to a voter when the card reader cannot successfully accredit him or her.
“The server was available for the card reader data uploading throughout the election and was shut down six weeks after the election,” Oladunjoye added.
When cross-examined by INEC’s counsel, Ikpeazu, Oladunjoye said the card reader machine used for the presidential election was the same for the governorship.
According to her, the only issue in the card reader machine was that the machines were reconfigured before the governorship election.
“If a card is damaged, the card reader may not be able to recognise it, the card reader is a RF ID card, which has antennae; the card reader communicates to the antennae to 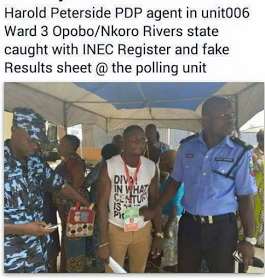 One Reply to “Police finally opens up : We saw PDP men thumb printing openly during election.”