A woman recently reported that she had unwittingly purchased small pieces of rolled up paper sold to her as rice on the streets of China.

Ms Cai, from the Guangdong province, a coastal region of south-east China, claims she was eating lunch with her family when she bit into a tightly rolled piece of paper that was disguised in a bowl of cooked rice.
‘The rice we ate felt no different than usual, until half way through the meal I chewed onto an unusually hard piece of rice,’ she told Chinese newsmen.

According to Daily Mail, quoting the Chinese media, Ms Cai reportedly pulled the grain out of her mouth and was shocked when it unrolled into a small piece of paper.

The paper appears to have been twisted at the ends to take the shape of a grain of rice.
According to reports, Ms Cai bought the rice from a street vendor who had assured her the rice was grown naturally, without any pesticides.
.

Cai told local police she bought the rice from a street hawker who promised they were grown in the countryside in a “very environmentally friendly” way “without any pesticides.”

Hong Kong Free Press reports that the woman and her family had been buying rice from the same hawker since the beginning of this year.

HKFP adds that the seller is unlikely to get caught because street hawkers are very mobile and Cai did not get a receipt when buying the rice, Shantou Metropolis Daily said.

The fake rice phenomenon has been in China for a while. Some of the reports indicate that the fake rice is sometimes made from a mixture of plastic and potatoes. 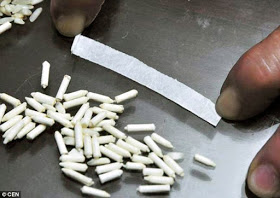