The National Commission for Colleges of Education (NCCE) Friday cautioned the Staff and students of the Alvan Ikoku College of Education in Owerri, the Imo State capital, to respect the directives of the Federal Government, which has put the upgrading of the College to a University on hold.

The Executive Secretary of the Commission, Professor Joshua Monday, who briefed journalists in Owerri, said that those resisting the directive are not doing the institution any good.

According to him, the decision to reverse the four Colleges of Education that were upgraded to Universities of Education back to their former status, was not influenced by any person or group of persons within or outside the Colleges, but was taken by the President in his wisdom.

According to him, “we are here to put the records straight. Alvan Ikoku is a one of the oldest Colleges of Education. It has been running as a degree awarding college in affiliation with other institutions. It was upgraded to a University of Education and the people jubiliated and everything was put in place. A Vice Chancellor was appointed, while the Provost became the Deputy Vice Chancellor.

The NCCE boss who was accompanied by Directors in the Commission, added further that, “after the directive was given, the four VCs were invited by the Federal Ministry of Education and told the implication of the directive, which is that the conversion has been reversed and there is no longer a place for the post of a VC. And for the Provosts who were the Deputy Vice Chancellors, they were also invited and told in clear terms the implication of the directive that they should go back and take over as Provosts and they were given authorization letters to that effect.

“We know that the Staff and other individuals received the directive with mixed feelings which they are entitled to but no one should oppose the directive or be seen as fighting the Federal Government. So anyone still parading as a VC or manipulating the Staff or unions is not doing the institution any good.”

Meanwhile, the staff and students had vowed to continue to resist the directive, until the Federal Government reverses itself on the decision.

The students, who barricaded the school gate, lamented that some elements within the institution, were responsible for the downgrading of the University.

When The Nation visited the College, the gate was still under lock and key, while heavily armed policemen guarded the premises to avoid breakdown of law and order. 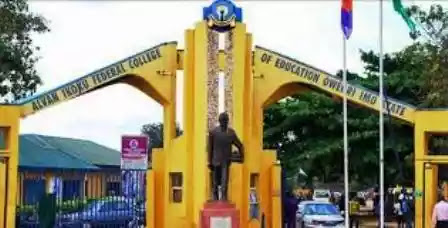