While they go about showing their affluence and rich lifestyle little would one know that some of those wealth are borrowed luxury .
Below are some of the names 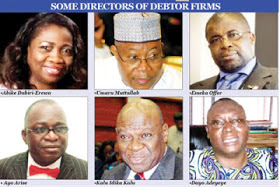 Nigerian Deposit Money Banks on Monday continued with the policy of naming and shaming their delinquent debtors with further publication of the names of firms and their directors whose loans have become non-performing for more than one year.
While nine banks published the names of the loans defaulters on Monday, four banks released the lists of their chronic debtors, owing a total of N143.81bn, on Tuesday.The four banks are First Bank of Nigeria Limited, Access Bank Plc, Diamond Bank Plc and Unity Bank Plc.The banks, which had published the list of their delinquent debtors on Monday were Zenith Bank Plc, Guaranty Trust Bank Plc, Union Bank Plc, Sterling Bank Plc, Skye Bank Plc, Fidelity Bank Plc, Stanbic IBTC Bank, Heritage Bank Limited and Enterprise Bank Limited.First Bank, which has its total amount of non-performing loans as N43.72bn, published 92 names of delinquent debtors.The first five companies on the lender’s list owe a combined sum of N23bn. These are:

Unity Bank also released 260 names of delinquent debtors with a combined NPL figure of N45.52bn.The list has the companies of some prominent Nigerians. These include:

Diamond Bank Plc has N47.17bn as its total NPLs, with companies belonging to prominent Nigerians owing sizeable amounts.These include:

Aside the 13 banks which have published their debtor lists, other banks which will publish theirs this week are Ecobank Nigeria, First City Monument Bank Limited, Standard Chartered Bank, Keystone Bank Limited, United Bank for Africa Plc and Wema Bank Plc.Investigations by PUNCH on Monday revealed that most of the banks had cut their list of delinquent debtors due to litigation with their customers over disputes arising from loan terms and last-minute renegotiations by some banks