In many Countries, the issue of Bride price has been known to be a well grounded factor in determining your franchise over the lady.

In some parts of the world, this issue has been blown beyond proportion that huge money is usually asked by the Bride’s parent and many suitors see this as very discouraging.

The amazing fact is that if you ask anyone why a bride price must be paid,they will be very quick to answer that GOD commanded it and even our pastors are quick to lay emphasis on this as a condition that must be met before a man and woman can be said to be married before GOD.

But is Bride price really a condition necessary for marriage? Can we say you are really married even if bride price have not been paid? Did GOD specifically lay down this as a law or was it man made tradition? Can Bride price be paid at anytime during the course of the couple living together as Man and wife? and is it proper for the bride’s parents to present a list or ask for monetary bride price from the groom’s family?

These shocking truths from the very Bible people use as yardstick for bride price will clear the air.

1. Bride price was never a commandment from GOD as a condition for marriage but only as a penalty for rape and in fact, you can still pay the Bride price and still be denied the woman to be your wife by the Father.

Lets read this from the book of exodus 22:16-17:
“If a man seduces a virgin who is not pledged to be married and sleeps with her, he must pay the bride-price, and she shall be his wife.If her father absolutely refuses to give her to him, he must still pay the bride-price for virgins.”

Deuteronomy 22:28-29: “If a man happens to meet a virgin who is not pledged to be married and rapes her and they are discovered, he shall pay her father fifty shekels[a] of silver. He must marry the young woman,for he has violated her. He can never divorce her as long as he lives.

2.Monetary bride is to be paid only on a virgin provided the man has slept with her before he decides to marry her but if the man has never slept with her,there should be no need to pay a dime on her.(Read again Exodus 22:16-17 above)

3.Even if a man meets a virgin and defiles her and decides to marry her,no man is expected to pay more than 50shekels of silver as a penalty and according to Google research, 50 shekels of silver is just about 15usd today so what is this madness going on where in some places a man is asked to pay hundreds and thousands for a lady who have probably slept with many men.

4.There was never ever a place in the Bible where GOD commanded the bride’s parent to present a list but it is the groom’s responsibility to bring whatever he dims fit for the lady he wants to marry.

The great example in the Bible was Isaac’s marriage to Rebekah who was a virgin and there was no monetary exchange or penalty whatsoever between the two families but affordable gifts were giving to Rebekkah’s family by Abraham but not demanded for by Rebekkah’s family. Read Genesis 24:52-54.

5. Bride price according to the bible is all about virgins and all the references and bible verses all point to paying a penalty for defiling a virgin as well as giving gifts as Abraham did to Rebekah who also happen to be a virgin.

Genesis 24:15-16:Before he had finished praying, Rebekah came out with her jar on her shoulder. She was the daughter of Bethuel son of Milkah, who was the wife of Abraham’s brother Nahor.The woman was very beautiful, a virgin; no man had ever slept with her. She went down to the spring, filled her jar and came up again.

6.Payment of monetary bride price on ladies generally whether virgins or non virgins is a tradition and not a direct commandment from GOD and in some countries like india,its a woman that actually pays a dowry on the groom and not the other way round.

7.Presenting list or asking for monetary bride price from a man who conscientiously marries a lady is man made rule and not from GOD hence becomes a sin because its better to obey GOD rather than men.

Acts 5:29:Peter and the other apostles replied: “We must obey God rather than human beings!

Conclusively i would advice that we just flow with the fun fare and traditions of the land and pay the bride price to either the Father of the Bride or the Mother of any lady we want to marry even if she is a LovePeddler.

Nevertheless.outrageous monetary bride price or list must be discouraged because it is not even Biblical in the first place but only necessary to obey customs and traditions.

Even Prophet Mohamed(May the peace of GOD be upon him) has this to say:

“the most blessed marriage is one in which the marriage partners place the least burden on each other” (al-Haythami, Kitab ab-Nikah, 4:255). 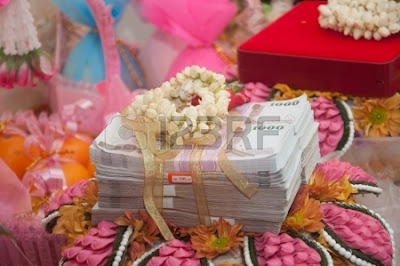