Wife of the richest man in the world, Melinda Gates, was pictured on Saturday carrying on her head a bucket of water fetched from a village in Malawi.

The billionaire’s spouse, who described herself as “philanthropist, businesswoman, mother, passionate advocate for women and girls,” posted a photo of herself with a 20-litre bucket of water on her head alongside two other Malawian women, walking on a dirty road.

She has been described as one of the world’s famous social activist “who is trying to serve the people in ignorance.”
According to Forbes magazine’s annual list of the world’s billionaires, the Gates are worth $76 billion. 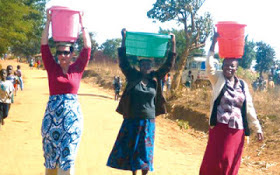