Edo State governor who accompanied Buhari in 4-days State visit to United States has alleged that A minister who served under the former Goodluck Jonathan administration, stole $6billion (more than N1.2 trillion), he told Reporters on Monday.

But quick contact with United States Department in Washington-DC, on the matter said it is false allegation. US State Department denied the story, asked Oshiomhole, to name the official and not drag United States into Nigeria domestic politics, Republic Reporters gathered.

“We have moved away from a president that doesn’t seem to know his powers to one that understands that he is a president of the country in the continent,” Mr. Oshiomhole said in response to criticisms of the trip by the opposition Peoples Democratic Party.

He spoke on Monday at the state house where he and the Kebbi State governor, Atiku Bagudu, as members of the APC governors’ forum, briefed President Buhari on the outcome of a discussion held with APC Senators Sunday.

“PDP destroyed the country- I mean from the lips of American officials; senior officials of the state department. They said one minister under PDP cornered as much as $6billion, and the man said even by Washington standard that is earth-quaking,” he said.

He said the country was being very patient with the PDP; otherwise Nigerians would have been “stoning” anyone carrying the badge of the party.
Mr. Oshiomhole said the PDP government plundered Nigeria, destroyed its institutions, damaged the military, converted the NTA to a party megaphone, destroyed the SSS, went after opposition, and compromised even student unions.

Mr. Oshiomole said under the PDP, there was no law as they were law to themselves. “We are a very patient people. If we were not a patient people, anybody wearing the tag of PDP ought to feel very unsafe because you are all victims- all of us here,” he said.

He quoted American officials as saying that Mr. Jonathan was seen as a confused president who did not know what they issues were, leaving others outside the country “frustrated”.

Recalling a chat with the US Assistant Secretary of State, Johnnie Carson, on the difference between the two administrations, Mr. Oshiomhole said Mr. Carson told him that each time they thought that there was light at the end of the tunnel for Nigeria and it is time to encourage them to build on it, “you we would wake up the following day under president Jonathan to find out that even the tunnel had been removed”.

“Now last week, this same Carson cheered the president’s address at the Institute of Peace. And he said ‘we now have a man of enormous integrity; one that has shown so much faith in the democratic process; one that refused to be frustrated even in the face of massively rigged elections,” he said. 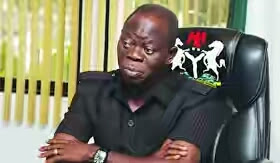 One Reply to “Don't drag us into Nigeria's politics, US state Department denies Oshomiole's $6bn story (shortfalls of the story)”