A single mosquito bite has caused a man’s entire face to swell up like a balloon.
Mr Zhang, 30, was bitten by a mosquito while at work in Jiangsu province, eastern China, at the end of May.
Soon his entire face became so swollen that he could barely open his eyes, but the swelling still has not gone down two months later, reported the People’s Daily Online.
Doctors say the swelling is entirely down to the bite and there is no particular treatment except for using ice on his face.

Mr Zhang suffered a high fever on 15 June but has had no other complications apart from the facial swelling.

Dai Tao, a director at the Luoyang Oriental Hospital, said: ‘His condition is extremely rare. Other than the swelling in the face, nothing else seems to be wrong.’
The doctor added that the swelling was Mr Zhang’s immune system reacting to the mosquito bite, which may have been more poisonous than regular bites.

Lymph nodes on the face and the neck have been blamed for causing the abnormal size of the swelling.

Mr Zhang has been dismissed from his job for taking time off work to receive medical treatment.

He is now resting at home, but is expected to require further treatment from specialists. 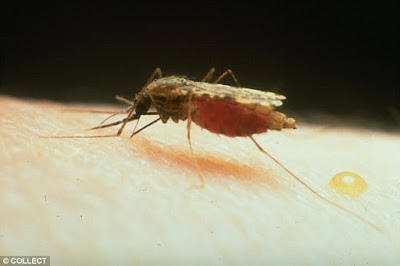 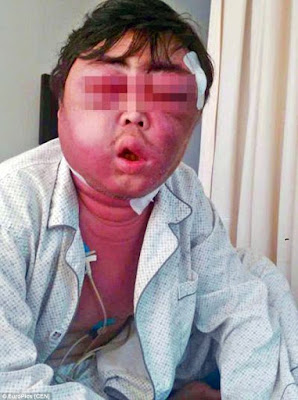 3 Replies to “WT?!!!! Man's head swells up like balloon after mosquito bite (photo)”