After a long protracted battle with life in Coma  Bobbi Kristina Brown aged 22 finally gave up the ghost. This is coming  six months after she was found unconscious in a bathtub.

The aspiring singer was rushed to hospital and placed in a medically-induced coma on January 31 after she was discovered face-down in the water-filled tub at her townhouse in Roswell, Georgia.

She passed away, surrounded by her family, at the hospice on Sunday – just 3 years after her famous mother, singer Whitney Houston, died aged 48 in a bathtub at a hotel in Beverly Hills.

Officials are planning to treat the death of Bobbi Kristina, who was found in the tub with bruises on her face and body, swollen lips and a missing tooth, as a murder investigation.

The person of interest in the case will reportedly be her boyfriend, Nick Gordon.

The Houston family said on Sunday night that Bobbi Kristina ‘is finally at peace in the arms of God.’

In a statement via a representative, they said: ‘Bobbi Kristina Brown passed away July, 26 2015, surrounded by her family. She is finally at peace in the arms of God. We want to again thank everyone for their tremendous amount of love and support during these last few months.’

May her soul rest in the lords bosom. Amen! 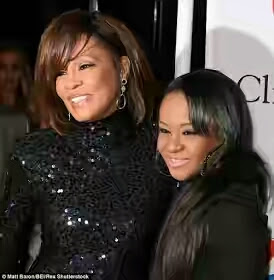 6 Replies to “END OF A LINE: Late Withney Houston's only daughter finally gives up the ghost”