Okorocha definetely as seen in the picture below has a lot to smile for now having met Obama who many politicians see as an idol to being the proud father of a first class holder and now flooring his opponent in the petition tribunals is no small feat. He definitely has a lot going good for him now.

The Imo State Governorship Election Petition Tribunal has dismissed the petition filed by the governorship candidate of the Peoples Democratic Party, Honourable Emeka Ihedioha, challenging the victory of Governor Rochas Okorocha in the last Governorship election.
The governor who’s currently on the a 4-day tour to the U.S with President Buhari and other delegates…discussing bilateral issues of mutual interest, has clearly won this particular case. 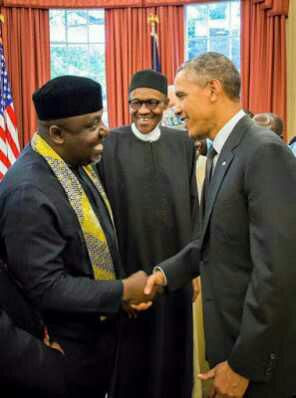 Delivering the judgment at the tribunal sitting in Owerri, the capital of the state, the Chairman of the Tribunal, Justice David Wyom, dismissed the petition on the grounds that the petitioner abandoned their petition, having failed to pay for the pre-hearing notice within seven days, as stipulated in paragraph 18 (1) of the rule guiding election petition proceedings.

Justice Wyom further stated that the petitioner applied on June 23, but failed to make payment for the pre-hearing notice until July 3, which was outside the seven days provided by law and on the strength of the Supreme Court authority on this issue. 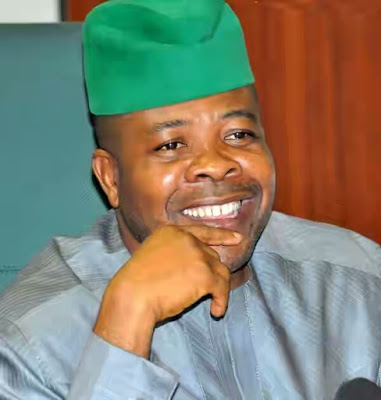 “The validity of the process starts from when the pre-hearing notice payment was made and not when it was applied which in turn means the petitioner paid out of time but applied within time,” Justice Wyom stated.

Earlier in court, counsel to Governor Rochas Okorocha and the All Progressives Congress, Adeniyi Akintola, moved a motion for the tribunal to dismiss the petition of the petitioner on the grounds that they had abandoned their petition, having paid out of the stipulated time.

While addressing reporters after the judgement, Adeniyi Akintola said he saw the loophole in their petition and hinged on it.

He stressed that the judgement made would enrich the judicial jurisprudence in Nigeria.

On his path, the counsel to Honourable Emeka Ihedioha, Mike Ahamba, stated that, as a senior lawyer, he was embarrassed by the ruling.

“The work abandonment has lost its meaning if a petition that has gone through pre-hearing session in which all parties participated can now be described as abandon in other words, the tribunal has overruled the Supreme Court order on this issue,” he said.

He further stated that his client had concluded plans to appeal the judgement at the Court of Appeal.

What happened in Court today was that there were three motions to be decided: one had to do with filing pre-hearing application: the other had to do with striking out the reply filed by the Gov. and the APC as being incompetent process before the court: and another one was an effort to amend that process which we said was a void process they were conceding that all was not
well with the process. But the Court decided to rule on the pre– hearing notice application on the ground that the application notice was a
jurisdictional matter.

It was based on that, that he opted to hear the application to dismiss our petition for abandonment because it was jurisdictional

well that’s alright. He has ruled and we said as the Court pleases but i have come out and received a telephone instruction by my client to proceed to the Court of Appeal and i intend to do so because the word ‘abandonment’ has lost its meaning if a petition that has gone through pre-hearing session in which all parties participated can now be said to have been abandoned. It
then means i don’t know the meaning of abandonment again maybe at the Court of appeal we will get a proper definition of abandonment. This is the position. It is law that the rule of court does not create jurisdiction.