Just a few days after the former president bashed Goodluck Jonathan’s work, he is now accussing him of paying people to attack him.

He made the allegation while speaking on the Channels Television programme, “Channel Book Club” last night. According to Obasanjo, the former president Jonathan paid people to attack him over his controversial book, “ My Watch” and claimed that Jonathan paid an activist from the South-West to criticize him.

While defending his book, Obasanjo said he did not have any regret on what he wrote, advising those who do not like what he said in the book to write their own. He stated that what his critics, including Wole Soyinka, said did not bother him.

In his words, Obasanjo said: “If I have to react to all criticisms people write about me, which most of them are not true, then, I will not have time to do anything really again.Wole Soyinka and I have been having running battle. As he has said that it will not end until one of us leaves this world and I have said in this book we re talking about that If he leaves before me, when I get to Heaven and I hope he will be there, he should welcome me. But If I leave before him, I will welcome him. Wole Soyinka is a gifted man, I have always acknowledged that, but he is a bad politician or poltiical analyst and it is my own point of view, he may agree with my own point of view or disagree,”

I just dont know who to believe now .. 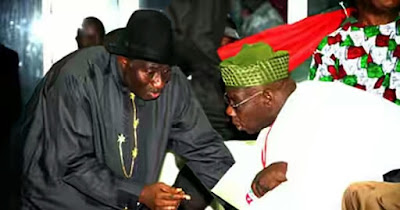 2 Replies to “Goodluck paid people to attack me , Obasanjo alleges”