Lionel Messi has found himself in the center of fresh controversy after the Barcelona superstar was paid “at least £2.4 million in cash” for a two hour appearance with Gabon president Ali Bongo Ondimba.

According to The Daily Mail, Messi laid the first stone of a stadium being built in Port-Gentil for the 2017 African Cup of Nations.

In an attempt to explain Messi’s appearance, President Bongo is quoted as saying:

“When I was in Barcelona a few years ago, I met Messi who had told me that he would come to visit me in Libreville. It’s a promise he made me. He is a man of honour who just kept his word.”

Daily Mail Column writer, Allen refers to President Bongo as “one of the most corrupt dictators” on the continent and references accusations of human rights abuse.

The Barcelona and Argentina striker, who is facing trial for tax fraud in Spain, also helped with the opening of a new Bongo family restaurant, and showed full support for their regime.

‘People are outraged about this,’ said an opposition source in the country, which is regularly linked with corruption and human rights abuses. ‘Messi should do a bit of research into what Bongo represents.’

One third of the Gabonese population live “at or below the poverty line,” according to World Bank statistics cited by Allen’s report, calling into question whether Messi’s “rental” made for an intelligent use of funds.

As for Messi, these latest reported earnings could serve to cause some confusion regarding the methods by which football’s biggest brand markets himself. 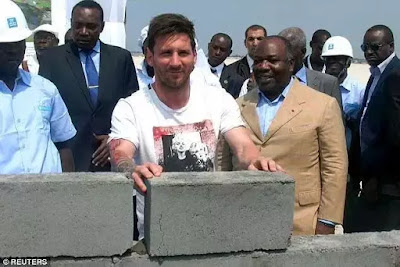