No one knows Majek better than Amos McRoy, last name Osifo, now pastor of Seed of Abraham International Christian Centre. The reggae artiste-turned-gospel singer also doubles as producer and CEO of Fresh Dew Studio. His cousin and former band mate, they grew up together. They once shared dreams of reggae greatness.

In  interview exclusively granted to Entertainment Express Pastor Amos debunked the general notions attributing his cousin’s plight to drugs and alcoholism. His is indeed the real McCoy as far as the true story of Majek goes. Here again, we reprised what we regard as the “The Amos McRoy Revelation.”

Prisoner of Conscience was released to instant success. Success doesn’t change a person. It brings out the real you. Till tomorrow, Majek is still the same person in terms of humility, in terms of carriage and the rest of it. His problem: he listened to wrong advices. That is the root of his current predicament. Many people think Majek’s problem is drug-related. Truth is Majek’s problem is spiritual. Majek strayed into spiritism. Once, while on stage, Majek said, “Oh, Fela is my boy. Bob Marley is my boy”. He made that statement during a Rothmans Show at Tafawa Balewa Square and Dede Mabiaku, Fela’s protégé, went berserk. It took the intervention of Eddie Lawani to calm him. Dede didn’t quite understand what Majek was talking about. He was taking it from the physical sense, whereas Majek was talking spiritual. Majek went into spiritism at a lightning speed – like jumping from kindergarten straight to the university. Without a linking bridge. He was not properly schooled. So he couldn’t keep the rules. Majek totally “crossed the line” after the release of Prisoner of Conscience. Those days, we were sharing the same duplex at Anthony Village. I would see the Guru Maharaji people come to visit him. The same Guru Maharaji we all know, just starting out at the time. The Hare Krishna people also came. I thought “oh, this guy is popular, that’s why they are coming to him for one favour or another.” I didn’t know that it was deeper than that.

Majek released his album in April 1988. I released mine a year after. We were under the same management. We rehearsed at the same place, using the same band as back up. One day, we were coming from rehearsal; he was driving his Peugeot 505 car. One of our backup singers, Monica Omorodion (who now lives in the US), said “Bros

Amos, why is your record not making waves like Majek’s, or The Mandators, or Kimono?” Majek looked at me in the rear mirror and said, “Don’t mind Amos. He doesn’t want to ask me the road I passed to become a star. He thinks it is good record that makes someone a star”. When he made that statement, I gave him a knock from behind. “My friend shut up there! What are you doing that I am not doing?” I said. He switched to Benin language. “This is not the Majek you grew up with”, he said. Still I did not understand.

It took me 10 years to connect the dots. Not until we went to Cote d’Ivoire in 1998 that Majek told me certain things, that I became aware, in hindsight that “Okay, that is what my brother was talking about back then.”

The song “Send Down The Rain” had a spiritual force behind it. That was one of the things he told me in Cote d’Ivoire. Based on what he told me, I think he “crossed the line” before he released the album. In Cote d’Ivoire, I asked him certain questions. His reply was: “Amos, are you that naive? I released Send Down The Rain, everywhere that song was played, rain must fall. Even in summer while we were on US tour, I played Send Down The Rain and rain fell. I released Free Mandela and that month Mandela was released. I did fire (Majek Beware) the week that record was released was the week the Rodney King incident happened. That song, Fire o! Fire o! was played for almost two months in all the TV and radio stations in Los Angeles during that Rodney King episode. So, are you that naive? Don’t you reason?”

He started mentioning spiritual books. Then he told me: “You don’t know, I have got to the level of de Lawrence”. That was when I understood from which perspective he was talking when he said Fela and Bob Marley are his boys.

While we were growing up in the church, we were competing spiritually by fasting. There were three of us – myself, Majek and Friday Omagbon, who is now late. If Majek fasted for three days, Friday and I would go for seven days dry fasting. That was how we grew up. We were competing spiritually. Once in a while, God revealed things to him which he shared with us. And those things came to pass as they were revealed to him. If he had not gone into music, he would most definitely become a minister of God. If you listen to most of his songs, like Holy Spirit, or Righteousness Take Over The Earth, he was more or less a gospel artiste.

I started noticing weird manifestations in him at about 1991-2. We had a show at Eko Le’Meriden Hotel in Victoria Island, Lagos. To my surprise my brother came on stage fully dressed in a native doctor’s attire instead of his regular outfit. By that time, we were not living together anymore.

Majek’s problem is not drug-related. He took to alcoholism to get over his real problem. Failing to keep the rules of whatever he delved into, he started to hallucinate. He started seeing things. For instance, if he was in a room, he would tell you “open the door, open the window”. If you tell him the air condition is on, he would say “Can’t you see them spirits; you want to trap the spirits. Men, let the spirits move around.” He felt he could stop seeing those things by getting drunk. Till date, he has not been able to liberate himself from those spirits. Before we went to Cote d’Ivoire, we had few shows here – First at Waterparks in Ikeja, then at MUSON Centre on Lagos Island, thereafter, the eastern part of the country. By then Majek’s behaviour had become erratic. He would come on stage, unzipped his fly and started saying “Let me show you my d**k. I used to f**k American P***y”.

The event we went for in Cote d’Ivoire was like Nigeria’s Festac 77. Black artistes from all over the world were there for one week at the Félix Houphouet-Boigny Stadium in
Abidjan.

The Marley family came, so was every big reggae artiste. I was determined not to let him disgrace himself the way he had been doing lately in Nigeria. We got to our hotel and after allocating rooms, I stayed with him in his suite. As soon as he called room service and ordered for a bottle of brandy, I would pick the intercom immediately and cancel the order. We would begin to quarrel. For three days, I gave him close marking. He couldn’t drink alcohol. I forced him to eat. On the third night, around 2 a.m., while we were watching a movie in his suite, he looked at me and shook his head. He said: “Amos I envy you, men”. I said “What do you mean? How can you envy me, you are the star”. He said: “You won’t understand. Just hold on to Christ, the way you are, he would reward you at last”. I started probing him. One of the questions I asked was: “All these reports about you reading the Seven Books of Moses, are you really reading them?” His reply: “Seven Books of Moses? Those are kindergarten books.” He started mentioning books that I have never heard of in my life. He mentioned names too. That was how he came up with the line that he is getting to the level of de Lawrence. He told me many things. He told me he couldn’t keep the rules. He broke the rules. But he failed to tell me what the rules were.

It was in Lagos he mixed up with the wrong crowd, but his case worsened in the US. The circle he fell into in America complicated his problem, especially when he met a promoter called Paul (surname withheld). When he was signed on to Interscope Records, they brought in the producer of U2 to work on his album. That man also spiritually influenced him negatively. Those two guys were steep in spiritism. There is no difference in spiritism he
The devil is the same everywhere.

This is the irony: once Majek gets on stage, the spirit steps aside for him to perform; once he finished performing, the spirit comes back to start the torment. 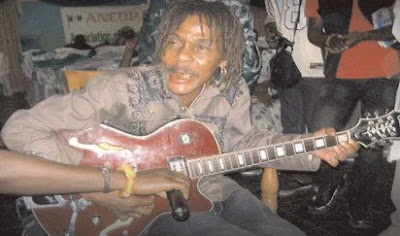 One Reply to “REVEALED!! The dark dirty secrets of Majek Fashek + the spiritual connections”