Nigeria’s former National SecurityAdviser, Col. Sambo Dasuki rtd, may now heave a sigh of relief as operatives of the department of State Security Service (DSS), who laid a 24 hour siege on his move have vacated the house. They however did not leave the premises until they executed a warrant obtained from a Magistrate court on Wednesday, to search the house of the ex-NSA.The search warrant Abusidiqu gathered covers the searched of three houses associated with him– his house, his 91-year old father’s house and his son’s house in Apo Village, Abuja.The DSS had on Thursday stormed the house and demanded to see the Dasuki, but the ex-NSA refused to surrender to the operatives.

The operatives then forcibly gained entrance into the premises and placed everyone in the house, including Col. Bello Fadile under house arrest.Mr. Fadile, who served as a director in the office of the National Security Adviser during the tenure of Dasuki was visiting the ex-NSA when the operatives arrived and he was promptly detained with his host.After the operatives of the DSS executed the search warrant, theyrecovered $40,000 cash, three unlicensed automatic rifles and Dasuki’s travel documents.

According to Abusidiqu  this may be the beginning of troubles for the Sokoto prince who may have explanations to give in regard of the billions of dollars he spent to execute the war against terrorism in the Northeast. 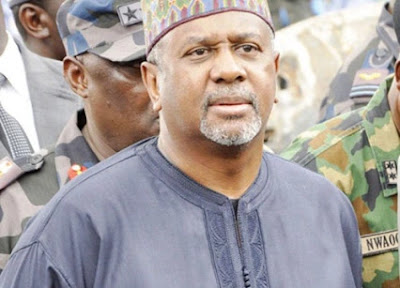