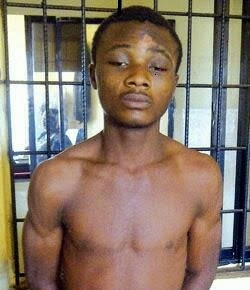 An Ogun State High Court in Abeokuta has sentenced a 26-year-old houseboy, David Idah, to death for the murder of a retired Senior Magistrate, Mrs Olufunmilayo Timeyin.

Justice Abiodun Akinyemi on Wednesday sentenced the accused, who hails from Benue State and worked as a domestic aide for the late senior magistrate, to death by hanging.

The convict had on March 28, 2014, killed the 65-year-old Timeyin at her residence in Laderin Housing Estate, Abeokuta, by hacking her with machete before slaughtering her about 3pm. Idah had been sacked by Timeyin after he was caught stealing.

He, however, returned to the house, scaled the fence before killing the retired magistrate.
The convict was arraigned on April 4, 2014, in Abeokuta Chief Magistrates’ Court on one count of unlawful killing.

The offence contravened Sections 316 and 319 of the Criminal Code Laws of Ogun State, 2006.