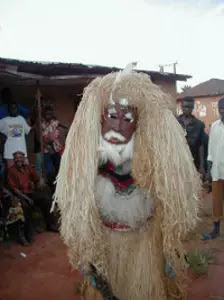 MEN of Enugu Police Command have arrested three persons in Enugu, who allegedly stabbed an Anglican priest after beating him, under the cover of playing masquerade.

The reason for the attack was yet to be ascertained but the state Police Public Relations Officer, PPRO, Mr. Ebere Amaraizu, who confirmed the incident said the three persons and the masquerade regalia are currently in police custody for interrogation.
According to the PPRO, “operatives of Igboeze North Division of Enugu State Command of the Nigeria Police have nabbed three suspects (names withheld), all of Igogoro, Enugu Ezike, Igbo-Eze North Local Government Area of Enugu State for allegedly conspiring to beat and stab one Reverend Christian Ajibo, an Anglican priest,
last Thursday with a dagger on the right side of his chest.”