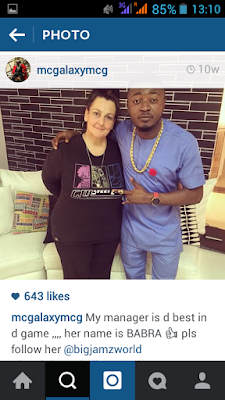 Crooner MC Galaxy who has a tag of allegedly beating up women is at it again and this time the unlucky victim is his expatriate manager BARBARA. 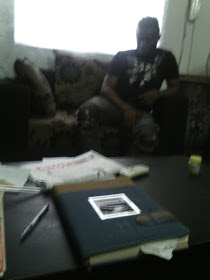 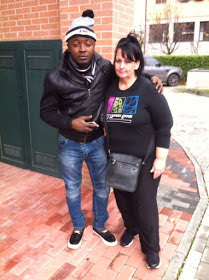 MC galaxy and Barbara the lady he beat the hell outta

According to witnesses who were at Maroko police station in Lekki phase 1 yesterday evening,the sight and bruises on the wrist of Barbara was really bad and galaxy was arrested and detained until early hours of this morning when he was released on bail after he signed an undertaking at the police station that if anything happens to Barbara in Nigeria he will be held responsible.

The European lady Barbara works for galaxy as his manager and lives in his house in Lekki with other artists who work on his label.

According to insiders
”First he locked her up in the bathroom for hours after beating her up and she managed to sneak a phone into the bathroom and tried reaching out to some Nigerians she knew for help luckily a friend called the police but before then galaxy had seized Her international passport, packed up her stuffs and dragged her into the jeep Governor Akpabio gifted him and was already driving furiously to the airport when the police accosted them and dragged them all to Maroko police station”

The informant summarises with ”When will Galaxy’s wings be clipped cause he had gotten away with too much of abusing and beating up women and every dog should have its day??

Barbara is currently in a sympathisers house recuperating from the shock she suffered in the hands of the musician.

MC Galaxy was charged with three count charges of battery and abuse and was to be remanded until the case charged to court but for begging last night.he was released early this morning and is yet to pay three months salary owed her.