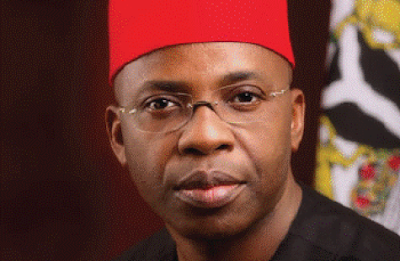 A Federal High Court in Abuja on Thursday granted a former Governor of Imo State, Ikedi Ohakim, bail in the sum of N270m.
Ohakim, who is being prosecuted for N270m fraud allegedly perpetrated in 2008, is to produce a surety resident in Abuja to guarantee the bail. Justice Adeniyi Ademola, in his ruling on the bail application, filed by Ohakim, also ordered the prosecuting agency, the Economic and Financial Crimes Commission, to submit the passport and other travel documents seized from the former governor to the Deputy Chief Registrar of the court.

The judge was silent on where the accused person should remain pending when he would meet the bail conditions.
But Justice Ademola had, on Wednesday, ordered the accused person to remain in EFCC custody pending the hearing of his bail application on Thursday.
At the hearing of the bail application on Thursday, the defence counsel, Chief Chris Uche.(SAN), urged the court to grant his client’s prayer.

He said his client, whose passport had been seized by the EFCC, had remained faithful to the bail conditions granted him by the anti-graft agency.
But the prosecutor, Mr. Festus Keyamo, opposed the bail.He argued that rather than granting bail to the accused person, the court should grant an accelerated hearing.

But the judge in his ruling held that the accused person had placed sufficient materials before the court to warrant granting him bail.
The EFCC had on Wednesday arraigned Ohakim on three counts of fraud, including making cash payment of $2.29m (N270m) for a property in Asokoro, Abuja.

The prosecution also accused the former governor of collaborating with Tweenex Consociates H.D. Ltd. to conceal the ownership of the property by drafting an agreement portraying him as a tenant in the property.

3 Replies to “UPDATED: Court Grants Ohakim bail of N270million same amount he was accused of stealing.”