A student of FUTO ( Federal University of Technology Owerri) has been confirmed dead by the institution’s medical centre.
The student by name Chibueze was reported to have visited the girlfriend’s lodge where he was found laying lifeless and then taken to the School’s Medicals who confirmed him dead .

Before now according to info obtained from gistdoor he woke up this morning and complained of pains in his neck and hand and before they could really understand what is happening he was already dead.

Chibueze who stays in Eziobodo,
a King Jeff Lodge occupant was a graduate who hoped to go for NYSC program this November, came back to round up his clearance.

When he was through he decided to pass the night in his
girlfriend’s lodge, who’s identity can’t be verified as of filling of this report due to conflicting stories, according to info gathered from some quarters it was reported that he died on top of his girlfriend while a reliable source told Gistdoor.wordpress.com that he
woke up and was complaining of pains in his hand and neck. As he was being taken to Medicals, he gave up the ghost.
Below is his lifeless body. 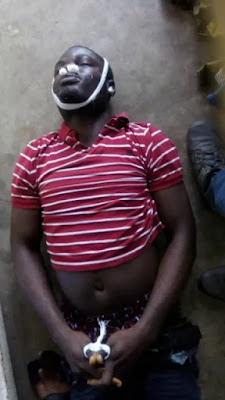 May his soul rest in peace Amen
#ozoemena