A federal court has ordered a former Jigawa state governor, Sule Lamido, and his two sons, Aminu and Mustapha, accused of fraud, to be remanded in Kano prison custody till September 28, Premium Times reports. This comes after the ex-governor was arraigned before Justice Riman Fatu in the early hours of today over graft allegations showing he received N1.35 billion bribe from a government contractor.
Delivering her judgement, Justice Evelyn Anyadike ruled that the ex-governor and his sons be remanded in a Kano Prison Custody because the EFCC said they lacked enough facilities to accommodate them.

Twenty eight-count charge bordering on a number of alleged breach of trust by Sule Lamido, Aminu Sule Lamido, Mustapha Sule Lamido and one Aminu Wada Abubakar, was read in court. However, the accused pleaded not guilty after the charges were read to them.

Justice Anyadike rejected the pleas of defense counsel, Effiong Effiong, SAN, that the accused be kept at EFCC custody, saying the commission had complained of adequate facilities.
Sule Lamido, and his two sons, Aminu and Mustapha

According to the defense counsel, remanding the accused in prison will amount to trampling on their fundamental human rights.
Reacting shortly after, the counsel to the EFCC, Chile Okoroma, objected to the plea, saying EFCC facilities were full to capacity both in Kano and Abuja.
However, Justice Anyadike ruled that the ex- governor and his sons be remanded pending the hearing of their bail applications.

The case was adjourned to 28 September for ruling on bail application.
It was gathered that there was chaos in court between those supporting Ex-gov Lamido and those against him, leading the police to fire teargas canisters into the air to disperse the
crowd. Meanwhile, a former special adviser to the ex-governor on Youth and Student Affairs,

Comrade Danjani Umar has described the arrest of his former boss as political witch-hunt meant to tarnish the image of the former
governor.

Meanwhile much have not been heard on Ohakim’s own fate as legal proceedings are still ongoing. 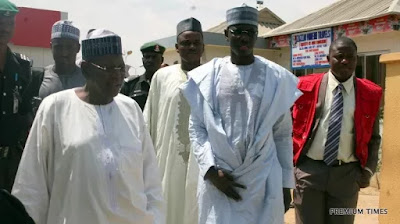