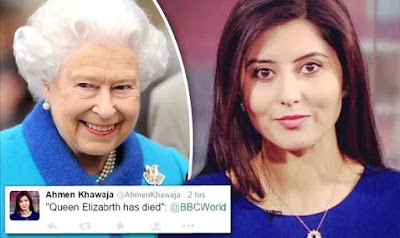 The BBC reporter who sent a tweet
mistakenly claiming the Queen had died committed “a serious breach” of guidelines, the BBC Trust has said.
The report said Ahmen Khawaja, a BBC Urdu reporter, had not been told the corporation was running a rehearsal of how it might handle a royal death.

The Trust said the tweets – which were picked up by news outlets worldwide – were
“a grave error of judgement”.
Ms Khawaja is facing disciplinary
proceedings over the tweets.
They were coincidentally published on the day the Queen was in hospital for her annual medical check-up.

After speculation about her well-being was raised on social media, Buckingham Palace took the unusual step of confirming the routine appointment. 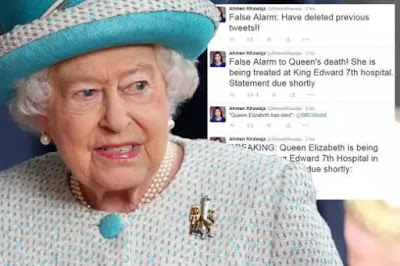