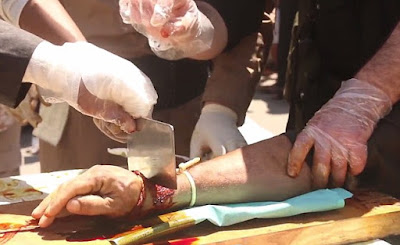 ISIS has released yet another barbaric video in which two suspected thieves are doused in red antiseptic solution before their left foot and right hand is chopped off with a meat cleaver.
The four minute-long propaganda video begins with a bearded jihadi announcing the man’s name and crimes to a crowd of hundreds of men and young boys. 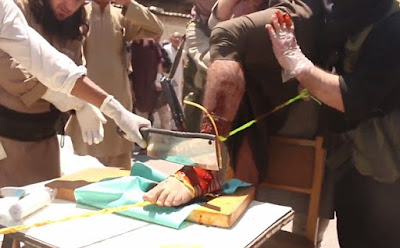 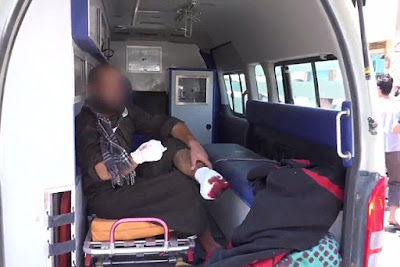 He is escorted to a small table in the middle of the public square where a militant ties two wires tightly around his foot and ankle, before pouring antiseptic solution on his foot. Using a shining meat cleaver, he then chops it off just past the heel.
The suspected thief does not seem to have been anaesthetised, nor does he look in an extreme amount of pain when his foot is lobbed off, probably due to shock. His foot is quickly bandaged before the same, sickening procedure is repeated on his right hand.
Islamic State sympathisers who shared the grotesque footage online claim ‘two armed thieves attacked herders and stole livestock and cars’, supposedly in the Syrian city of Homs.

His supposed ‘partner in crime’ is mutilated before one of the men, whose faces are never shown, is placed in the back of an ambulance…see more photos as you continue 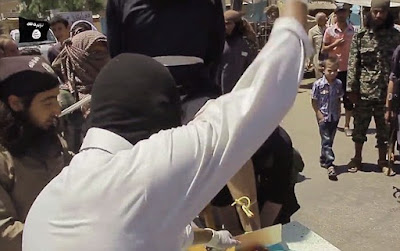 The sickening video was shared on social media alongside the caption: ‘Implementation of Hadd on two evil doers.’
In Islam, a ‘Hadd’ is a fixed punishment in the Koran for crimes considered to be against God,’ according to Oxford Islamic Studies.

This latest display of cruelty comes just one day after the terror group shared a video of a man being thrown to his death from a tall building in Iraq for supposedly being gay. 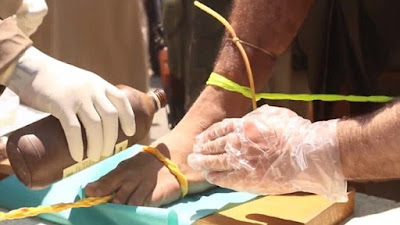 2 Replies to “Sickening photos of ISIS chopping of the hands and feet of men accused of stealing.”