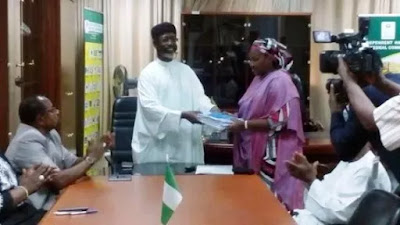 The national leadership of the Peoples Democratic Party has kicked against the appointment of Mrs. Amina Zakari as the Acting National Chairman of the Independent National Electoral Commission.
President Muhammadu Buhari on Wednesday appointed Zakara as the acting boss of the electoral umpire following the exit of Prof. Attahiru Jega from office.

Buhari in the letter through Head of the Civil Service of the Federation, Mr. Danladi Kifasi, said the appointment was with effect from 30th June 2015 until the appointment of a substantive Chairman.

But before her appointment was announced, Jega had handed over to Amb. Mohammed Wali, a national commissioner of the
commission from Sokoto State.
However, the PDP alleged that the new acting boss of the electoral body “is too close to the Presidency.”
National Publicity Secretary of the party, Chief Olisa Metuh, stated his party’s position at a press conference in Abuja on
Wednesday.

Metuh said his party would want the acting chairman of the commission to state her alleged closeness to the Presidency and one of the governors of the All Progressives Congress from the North-West.