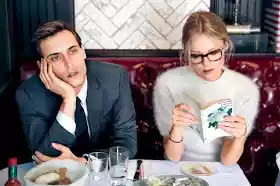 Some ladies like to stylishly punish guys when they go out on their first date to know if he can withstand their haughty behavior or as a way of telling him they are not interested in having a relationship with him.

The poor dude perhaps may have borrowed money just to make the date a memorable one. However he later discovers that instead of having a date with his supposed girlfriend alone, she eventually comes along with her numerous friends to siphon his pocket. Funny enough if he tells her his preparation was just for him and her alone, she will start nagging, giving unnecessary excuses like maybe he is a criminal or something, so she can’t trust a stranger.

2. They get busy with their mobile devices

This is when they bring out their collection of mobile devices and start pressing them as if they have not operated one before whereby making the dude look foolish and non existence in their presence.

3. They show up very late

When a date is fix at 3pm, they showed up around 6pm giving flimsy excuses of traffic jam due to a tanker explosion, armed robbery attack, boko haram bombing, etc. Thereafter, they won’t show any remorse at the expense of expecting the guy to apologise.
*Person whey e dey lagos dey claim boko haram bombing… some babes no sabi lie*

4. Monosyllabic response to your discussion

How can a guy talk like parrot from morning till night, trying to prove good sense of humour only for him to get short and annoying responses from her like “k” “alright”, “hmmm”, “what”, etc. His morale and confidence will burst like balloon…. one time!

This is the time they start calling their long time friends and relatives, keeping the guy in their lust prison like a dog. As a guy, so many things will be going on his mind as what he can do to have the lady’s attention.

If you have had similar experience you can share with us.