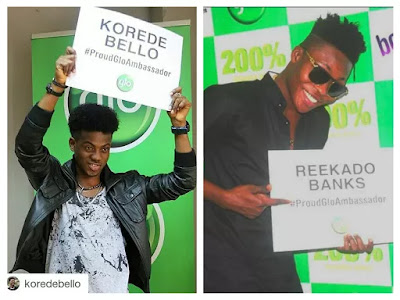 Telecom giant, Globacom has added the Mavin Records duo of Korede Bello and Reekardo Banks as its latest brand ambassadors.

The two were unveiled at the Lagos office of Globacom where they posed for photo session with the brand emblems.
An official statement is expected to be released by Globacom Nigeria.
Their signing come after that of Wizkid and actor, Odunlade Adekola.
Meanwhile, the telco company is expected to announce the capture of Mavin Records female act, Di’Ja any moment from now.
An insider said that she would have been unveiled today as well but was delayed for unknown reasons.
The latest development will make Mavin Records a home to both MTN and Glo ambassadors
Other acts on the label who are signed unto MTN include Don Jazzy, Tiwa Savage and Dr Sid leaving D’Prince as the only un-endorsed artiste on the label.

It may not come as a surprise to see
D’Prince also pitch tent with Globacom as an ambassador.

One Reply to “Mavin records divided with endorsements as Globacom captures korede bello and rekado banks in new endorsement deal.”