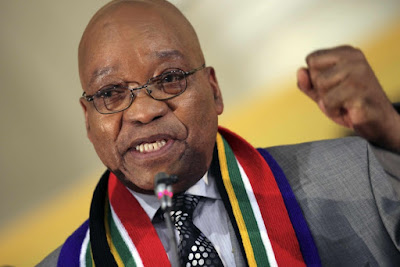 As illustrated beneath this paragraph, thebamount spent on the South Africa cabinet recorded a major increase when Zuma first assumed office. Nonetheless, it skyrocketed when he was re-elected. A that compared the cost of running South Africa cabinet and that of UK has revealed thatvthe cost of maintaining South Africa’s cabinet is three-times greater the cost of running the UK’s cabinet. According to the report, “the salaries of the UK’s 22- strong cabinet, including Prime Minister David Cameron – cost British taxpayers around R51m. Whereas it cost South Africa “a whopping R155m in salaries alone’.

Study the picture graph below and see for yourself how the number and the amount involved has risen steadily over time and does not show any sign of coming back down. 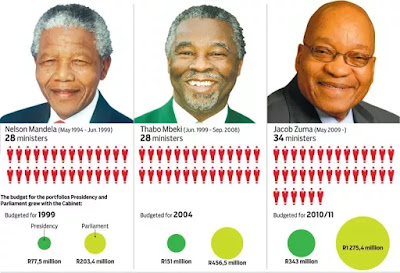 When complaints were first raise
concerning the number of ministers Zuma had appointed, he insisted that the size and shape of his executive is “required to deliver on the priorities” of the government he lead.

As such, he was allowed to appoint his 74 ministers and deputies which costs taxpayers an estimated amount of R4.4 million each day. South Africans grudgingly accepted this fate for we are willing to pay much for a better South Africa, but
considering how much time has passed, one begins to wonder if tax payers paid such huge amounts of money in vain.

While eager to see the cabinet deliver on the said priorities, South Africans ignored that it cost us a monthly average of R133.7 million and a minimum of R1.6 billion a year to maintain the executives. Also neglected is the fact that Zuma’s personal costs are significantly, responsible for a major percentage of the total cost. For instance:

R246m was spent on security upgrades at Zuma’s private home in Nkandla, KwaZulu-Natal

whereas his spousal
support unit cost South Africans an
estimated average of R10.9m a year to maintain and;
It cost South Africans a minimum
of R60.8m each year to fly Zuma from his home to his official residence in Durban.
South African MPs bag R933, 000 and Ministers earn R2.1 million. Also, while the cost for supporting staff for each minister totaled R291.6m, health facilities cost R62m.

In all, South Africa is spending three times what UK spends to run its government. Yet UK is thrice (if not more) developed than South Africa. How long will South Africans pay much to get nothing? How long will it take Zuma’s flock to deliver what they promised? Hopefully, it wouldn’t take forever.

OK now compare and contrast between Nigeria’s own and theirs