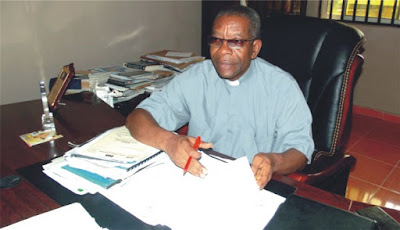 If the group of workers and academic staff clamouring for the removal of Imo state polytechnic rector haves their way he might have to use the exit door soon.

Further more, the workers went further to state that the rector has been owing them accruing arrears thereby being insensitive to their plights as workers. Also, the workers also charged governor to sack both the rector and the the polytechnic’s governing council whom they accused of allowing the rector too much authoritative hand and not playing their role very well and also lamented the shady manner in which ETF projects in the school was carried out.

This is coming after a staff of the polytechnic served the Rector a letter reportedly signed by Okija shrine demanding his presence there some months ago for some questionable reasons.