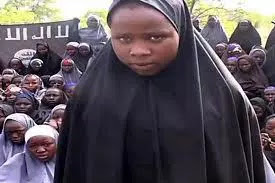 A new report now say that some of the Chibok schoolgirls under Boko Haram custody now fight alongside the Islamist militant group, the BBC has been told.

According to eyewitnesses, the girls are now being used to terrorize other captives, and are even carrying out killings themselves.

BBC reports that the testimony cannot be verified but quoted Amnesty International sources who say that other girls kidnapped by Boko Haram have been forced to fight About two-hundred-and-nineteen schoolgirls from Chibok, have been missing since in April 2014 after they were kidnapped from their school in northern Nigeria. Many of those seized are Christians.
Three women who claim they were held in the same camps as some of the Chibok girls have told the BBC’s Panorama programme that some of them have been brainwashed and are now carrying out punishments on behalf of the militants.
Anna, aged 60, is one of them. She fled a camp in the Sambisa forest in December where she was held for five months. She now sits beneath a tree close to the cathedral in the Adamawa state capital of Yola. Her only possessions are the clothes she ran away in.
When pressed on how she could be sure that it is was the Chibok schoolgirls that she’d seen, Anna said: “They [Boko Haram] didn’t hide them. They told us: ‘These are your teachers from Chibok.’
“They shared the girls out as teachers to teach different groups of women and girls to recite the Koran,” Anna recalled.
“Young girls who couldn’t recite were being flogged by the Chibok girls.”
“People were tied and laid down and the girls took it from there… The Chibok girls slit their throats,” said Anna. Anna said she felt no malice towards the girls she had seen taking part in the violence, only pity.

“It’s not their fault they were forced to do it.” she added. “Anyone who sees the Chibok girls has to feel sorry for them.”