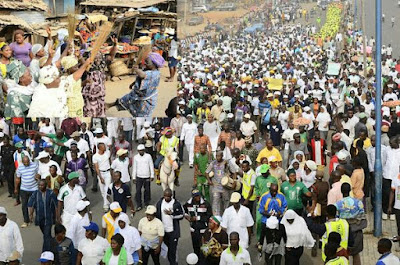 President Muhammau Buhari may have lost the support of some Yoruba elders less than 100 days into his tenure.
The leaders are particularly angry with Buhari over the recently concluded National
Assembly elections, which they feel was a big blow to the South west.

They berated the president for his silence and suggested that their region might not benefit from the Buhari administration despite voting massively for the president during the April 2015 presidential polls.

“For the fact that the South-West played a key role in the emergence of Buhari as the president, it is expected that they would occupy a more strategic position than the post of vice president”, said one of the elders.
They argued that the National Assembly leadership election has given the impression that their region is weak politically.

Some of the leaders who also participated in the last National Conference also say the region must re-strategise to assert itself in the politics of the nation.

They argued that the position of Professor Yemi Osinbanjo, the current vice president, who is a South west indigene is not a powerful position. Chief Ayo Opadokun, a South-West leader,
who spoke to the Nigerian Pilot yesterday on the current power imbalance, noted that the Yoruba race made a great mistake by not re-electing former president Goodluck Jonathan, considering what he had in stock for the zone.

He emphasised that the implementation of the National Conference report would elevate the standard of the zone, which is the reason people of the South-West should have queued behind Jonathan.
It will be recalled that during the
electioneering period, the Peoples Democratic Party Presidential Campaign Organisation warned the leaders of the All Progressives Congress to stop insulting Yoruba Obas.

2 Replies to “Are they serious!! We regret voting for Buhari – Yoruba leaders”