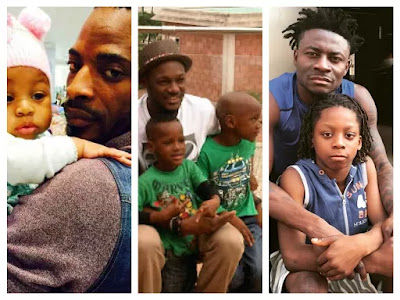 Without doubts, having babies out of wed-lock is no longer a big deal in the Nigerian entertainment industry.

And it is fast turning into a bragging right among celebrities, similar to how American celebrities brag about doing prison time.

Special mention must be made of the likes of Ice Prince, MayD, Olamide, Davido, Wizkid, Brymo, are all proud fathers with no legal wife.

ExpressNG brings you list of top 10 male celebrities who have kids from more than one baby mama.

Special Adviser to the Oyo State governor on Youths, Abolore, has children from three different women. The Gongo Aso crooner and his fiancé Olasunkanmi Ajala welcomed their first child together, a baby girl in 2014.

The baby is the singer’s fourth. His first son, Zion, was born while he was married to his ex-wife Toni Payne in 2008. Aside that, he had a set of twin girls with his ex-girlfriend Victoria ‘Vicky” Godis thus making him a proud baby daddy of four kids from three baby mamas.

Born Abdul Rasheed Bello, earlier said that he’s not ready to settle down any time soon.

Soccer star, Obafemi Martins popularly referred to as ‘Obagoal’ has all the credentials to make him part of this list as he is one of the proud celebrity fathers in Nigeria today.

Obafemi has three sons with three different women and he isn’t married to any of them. He welcomed his last son with Balotelli’s sister, Abigail Barwuah and they live together.

The talented actor already has a beautiful daughter who’s barely three years old with another woman. IK Ogbonna and his gorgeous girlfriend, Sonia Moralez who recently welcomed a baby together.

The identity of IK’s first baby mama had been hidden from the public eyes due to reasons best known to him, until he started showing her off on his Instagram page.

Flavour will have two children from two Nigerian beauty queens. He welcomed a child with beauty queen Sandra Okagbue in September 2014.

Music sensation, Oritse Femi who rose to fame since the release of his re-make of Fela Kuti’s ‘Double Wahala’ song, is a proud father of two beautiful daughters who are between 9 and 10 with two different baby-mama’s.

Oritse Femi has said it severally, that he has no plans whatsoever to marry any of the mothers of his daughters. According to him, he’s got a fiancee and they are planning to get married soon.

Celebrated singer, Innocent Idibia, better known as 2face Idibia, has been the butt of jokes of comedians who tagged him as ‘Father Of Many Nations.’

He is legally married to longtime girlfriend, Annie Macaulay and the union is blessed with two kids.

However, the award-winning singer has five kids with two Baby Mamas namely Pero Adeniyi and Sumbo Ajaba who is now married to a pastor.

Tee Billz – One Baby Mama and a wife

Tiwa Savage’s Manager turned husband, Tee Billz reportedly has two children with ex-girlfriend before he got married to the sensational singer.

According to information, the ex-lovers were not married but reportedly dated for a couple of years and the romance resulted in two beautiful girls.

He now expects another bundle of joy from wife, Tiwa, who is due to deliver in a couple of months.

Although, the talented and handsome composer has not officially tied the knot with any woman, yet . he is said to have up to
12 children from five different women.

Award winning fuji maestro, Wasiu Ayinde Adewale is referred to as the father of many generations with over twenty children from different women. When asked to reveal the number of children he has, the veteran singer has never given a straightforward answer and would quickly back his claim with a Yoruba saying that, ‘you do not count your kids.’ However, he’s known to be married to two women, Fatiah Ayinde and Titi Marshal.