No fewer than 12 cultists will be charged to court in relation to various killings in Calabar and other parts of Cross River State, the police said. The cultists, who are currently in the custody of the Criminal Investigation Department of the Cross River State Police Command in Calabar, are still being investigated before they would be prosecuted for offences committed at the law court.

Residents of Calabar had in recent times been terrorised by activities of various cult groups.The situation is not different from other major towns in the state where the groups had been involved in killing and maiming of innocent people. Southern City News learnt on Friday from the state police command that more arrests were still being made to get to the root of most of the matters, while dangerous weapons including guns and large quantity of ammunition had been recovered from the suspects.
The Police Public Relations Officer in the state, Mr. Hogan Bassey, said those arrested had confessed to being members of the Vikings Confraternity, Black Axe Confraternity and KK cult group… He gave the names of the arrested suspects as
Benedict Udoka (28), Paul Asuquo (23) Anthony
Orim (22) Francis Omang (22),EtimNsa
(33)EffiongEdet (26), BasseyOrok (18),
EyoBassey (21),EnoBassey (19), UmohEkpo
(27), Emmanuel Daniel (29),PaulinusEdem (28)
and Christopher Undie (24).
Bassey said two of the suspects, who claimed to work for the state Department of Public Transportation, were arrested at a restaurant along Eyoma Street in Calabar, where they went to eat ‘dog meat’. 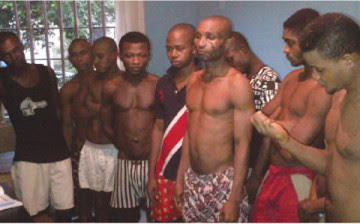 He said, “Information was received on March 2, 2015 at about 12.45pm that a group of boys suspected to be cultists were sighted at a dog meat joint along Eyoma Street in Calabar, the police swung into action and arrested Benedict Udoka and Paul Asuquo. A locally made pistol was recovered from Benedict. They confessed to belonging to Viking Confraternity and they will soon be charged to court.

“Others were arrested in different parts of the state after killing innocent people during their cult activities. Items ranging from locally made pistols, ammunition, knives and cutlasses were recovered from them in the cause of the raid.”

However, responding to the allegations against them, Benedict, who hails from Obot-Akara Local Government Area of AkwaIbom State, denied his involvement in cult activities, adding that he was arrested with a pistol that belonged to his friend. He said, “I was not doing anything with the gun. I was about to leave for my place of work at the Department of Transportation when one of my friend called Martins gave me a polythene bag to keep for him. I did not know the content.

He said he was going to buy some electrical equipment. I went with the polythene bag to where I went to eat. Three policemen were there, the place was close to the Mbukpa Police Station in Calabar-South.
“Meanwhile, a friend of mine was seated beside me. At that point I decided to open the polythene bag and I discovered there was gun inside.

I drew the attention of my friend seated beside me to it. I told my friend that I was going to take it to the police station but my friend advised that it will not be wise and that I should wait to hand it back to the owner. It was at that point that the policemen around sensed there was something amidst and they came to apprehend us.” However, another arrested suspect identified as Paul Asuquo, who said he hails from Creek Town in Odukpani LGA of Cross River State, said they were victims of circumstances but admitted that they knew it was illegal to possess a firearm that is not licensed.

“I am not happy about what has happened to us because in the first place, it was illegal to hold a gun if you do not have a license for it. It is really not our fault because we are not the owner of the gun. I was only on duty when my friend called me to escort him to where we would eat. I do not know the owner, but my friend knows him,” he said.

One Reply to “Photos: Vikings,KK and Black axe confraternity lands in police net over killing of 12 persons in calabar”