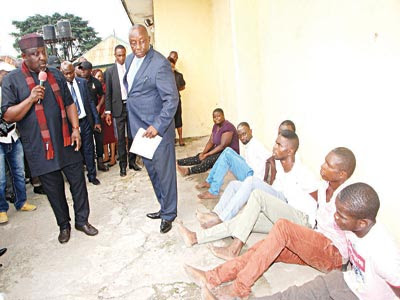 THE Imo State Command of the Department of the State Security Service (DSS) has arrested a suspected six –man gang of kidnappers said to be terrorising people in the state. This is the second time of achieving this feat in about a month, The Guardian gathered.

Parading the suspects before the Imo State governor, Chief Rochas Okorocha on Monday at the DSS office in Owerri, the Imo State Director of the Service, Mr. Francis Ejiofor, said the gang members were arrested by his men following a tip-off and intelligence reports, adding that the victim, one Chinasa Nwadike Nnawuike, was abducted on June 15 and kept in a convenience room of the building in Nkwerre Local Council of Imo State for five days before his men swooped on the area and freed him

The security expert, who said that he set up task forces to prosecute the job and had his men stationed in all nooks and crannies of the state to curb the crimes of kidnapping and cultism as directed by the Federal Government, disclosed: “In line with the directive given to us in combating kidnapping all over the country, the Imo State Command of the DSS went into action and caught them in their hideout.

This has also been supported by you (governor) to this Command. You have also been a pillar of support to us.”

He expressed optimism that before long, such ugly acts would be a thing of the past, urging the people to help with useful information and cooperation.
Reacting, Okorocha commended the Command for the effort, pledging the support of his government to assist them. He urged the police to prosecute the alleged kidnappers according to the law while appealing to Imo people to be mindful of their neighbourhood and report any suspected foul play.

He said: “I must commend you for a job well done. This is what we expect of security services of the Federal Republic of Nigeria. I am very much impressed. Now what I want to assure you is that Imo State is working together with security agencies. We shall guarantee the security. It is our constitutional responsibility.”