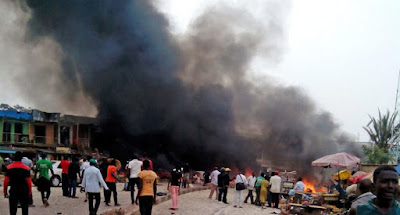 At least 20 persons have been confirmed dead and scores others injured after a female suicide bomber detonated her explosives at a bus station in Maiduguri on Monday.

A civilian vigilante who confirmed the attack to newsmen in Maiduguri, the Borno State capital on Monday, said several persons were injured in the latest attack..
“We have sorted out 20 dead bodies and 50 others that were injured,” said a certain Danlami Ajaokuta who escaped the blast near the city’s fish market on Baga Road.