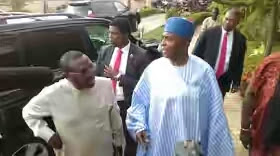 A source who was part of the meeting informed PREMIUM TIMES that the Senate President was in Abeokuta to beg Mr. Obasanjo to reconcile him with President Muhammadu Buhari and his party, the All Progressives Congress, APC.

Mr. Saraki emerged as the president of the Senate against the decision of APC leaders. He was also elected when most Senators from the APC were at the International Conference Centre waiting to hold a meeting with Mr. Buhari to discuss the election of the Senate president and Speaker of the House of Representatives.

Premium times gathered that Mr. Saraki lamented that although the party leaders have stated that they have accepted his emergence, there was “complete communication breakdown between him, the president and the party”.

The national chairman of the APC, John Oyegun, had abruptly cancelled a scheduled meeting with Mr. Saraki last week without giving another appointment.
Likewise, we also gathered that Mr. Saraki had tried severally to meet with Mr. Buhari after his emergence, but was always denied audience.

Another source in the presidency informed PT that the President was angry with Mr. Saraki and the management of the national assembly for going ahead with their election despite adequate knowledge of an invitation for a meeting with Mr. Saraki and his colleagues.

“The president considered it as a mark of disrespect for his office for Saraki to ignore an invitation to meet with him and his colleagues,” our source said.
In his response, Mr. Obasanjo promised to do his best to “ensure communication between all parties”.
However, the spokesperson for the president, Garba Shehu, said the Senate president did not seek to meet with Mr. Buhari.

“I am not aware of any request for a meeting, the president would have seen him, he represents a key institution in our democracy,” he said.
Calls to Mr. Saraki and his aide, Bamikole Omishore, were not answered.
However, the former president in his usual self also joked with the delegation, saying “ you children of nowadays only run to elders when you have finished making the damage”.

PREMIUM TIMES also learnt that after he was informed of the visit, Mr. Obasanjo called Mr. Buhari to inform him that Mr. Saraki is leading a delegation of Senators to his Abeokuta home and Mr. Buhari simply said “you have to see them now, are they not your boys?”.
Among Mr. Saraki’s delegation include former governor of Gombe state, Danjuma Goje, Andy Uba, former Zamfara governor, Ahmed Sani, Olagunsoye Oyinlola and others. 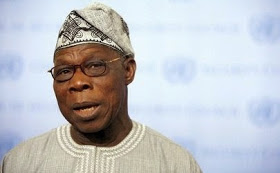