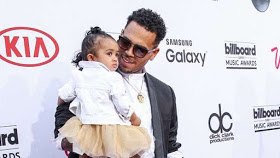 Looks like Chris Brown is now mature as he is a father after-all. The 27-year-old pop star has ordered that no smoking, drinking and groupies will be allowed on his tour bus as his 2- year-old
daughter Royalty joins him on tour. Cuss words are not allowed on the tour bus too.
His tour bus will now have kiddies entertainment such as Disney DVDs such as Frozen and Mickey Mouse Clubhouse.
Brown is really smitten with his daughter as he constantly shares pictures and videos of two of them together on Instagram.
One person who would not be on his tour bus is his former flame Karrueche. Chris Brown’s ex has moved on after her rocky relationship with the pop star.

On Sunday, June 14, 2015 Chris Brown and Karrueche clashed on Instagram. The model told Brown to man up after he accused her of exploiting his name.

One Reply to “Chris brown bans smoking, drinking and groupies as daughter joins him on tour”