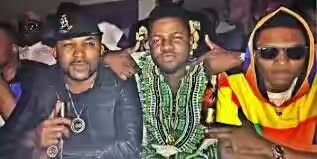 Skales, former EME’s signee has again opened up the fresh wounds of his fight with his ex-colleague, Wizkid.
Although the young rapper who recently released his debut album, ‘Man Of The Year,’is still basking in the euphoria that accompanied his album release party which attracted a lot of top guns in the entertainment industry, but he is yet to total let go of the hurt he is feeling inside.
Clearing the real reasons he didn’t bother featuring either Wizkid or BankyW on his debut album, the Kaduna State born ‘Shake body’ crooner said,
“It’s not by force to feature them. Besides, everybody have their different schedules, so the time didn’t fit in for us all. This album had been ready a long time ago, so that’s another reason.”
On the nature of his disagreement with Wizkid and whether they had mended fences, Skales added that he has since moved on with his back and has no intentions to look back.
“Whatever happened has happened. Me, I’ve moved on.” he concluded.