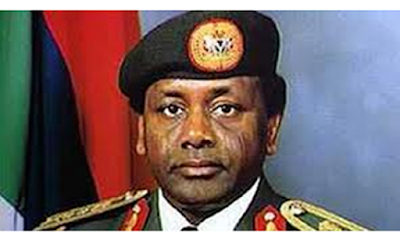 Abacha received his formal military training at Nigerian and British military training colleges. He rose through the ranks in the Nigerian military and by 1983 had achieved the rank of brigadier when he assisted Ibrahim Babangida in overthrowing Shehu Shagari, who had been elected to his second presidential term in 1983. Muhammad Buhari became Nigeria’s leader, but just two years later Babangida overthrew Buhari and installed himself as leader with Abacha second in command. Elections were held in 1993 and were won by Moshood Abiola, a candidate supposedly supported by Babangida, who, however, annulled the elections and set up a civilian interim government, which Abacha quickly overthrew.

Although Abacha promised a return to democracy, his actions were anything but democratic. He banned political activity of any kind, fired a large portion of the military, controlled the press, and assembled a personal security force of some 3,000 men. While he supported the Economic Community of West African States (ECOWAS) and its military arm, ECOWAS Monitoring Group (ECOMOG), in sending troops to restore democracy in Liberia and Sierra Leone, he brutally suppressed dissent at home. Abiola and Olusegun Obasanjo, a former military leader of Nigeria (1976–79), were jailed for treason.

Wole Soyinka, Nigeria’s Nobel laureate, was also charged with treason, although he had voluntarily left the country. Perhaps Abacha’s most brutal act was the imprisonment, trial, and subsequent execution for treason of writer Ken Saro-Wiwa and other Ogoni activists who were concerned with the environmental exploitation of their region by multinational petroleum companies.

Abacha’s sudden death in June 1998 moved along the process of returning the country to civilian rule. His military successor, Abdusalam Abubakar, oversaw the return to an elected civilian government in 1999. After Abacha’s death, it was rumoured that he and his family had enriched themselves by some $3 billion, most of it held in European banks. In 2002 a settlement, which returned most of the money to the government in exchange for dropping criminal prosecution, was reached between the Obasanjo government and the Abacha family.

Tell us what you remember about him .

One Reply to “17 years after: Remembering the man Abacha + what you should know about him”