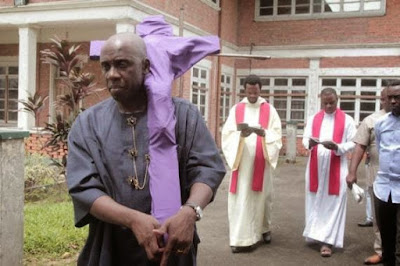 The war between Riverside State Governor, Mr. Rotimi Amaechi and Governor-elect, Chief Nyesom Wike, is far from over.
Ahead of the Friday’s inauguration, Amaechi declared that he would not forgive or settle the feud between him and Wike until justice is done.
The governor made this declaration during his 50th birthday thanksgiving service at the Corpus Christi Cathedral in Port Harcourt, while reacting to the plea by the Catholic Bishop of Port Harcourt Diocese, Most Rev.
Dr. Camillus Etokudoh, that both politicians (Amaechi and Wike) should reconcile their differences in the interest of the people.

He said, “My Lordship talked about
forgiveness. In the Catholic Church you don’t oppose the views of your bishop. His words represent an order. If you oppose him you may be barred from taking Holy Communion.

“You are not a true Catholic if you don’t receive the Holy Communion. But Your Lordship, the same Catholic doctrine also states that justice comes before forgiveness.
“All those that were killed during the last general elections must get justice. Their families must get justice. Our party, the AllvProgressives Congress, must get justice first at the petition election tribunal. Our mandate must be retrieved at the tribunal.
“I am surprised that My Lordship
congratulated Nyesom Wike here today. I am using this opportunity to call on the Church to join the APC in praying to God so that we can reclaim our mandate.
“Reclaiming our mandate at the election petition tribunal will represent a measure of justice. We must seek justice before
reconciliation,” the governor stressed.
“I was shocked by some of the people that betrayed me. At the appropriate time, God will forgive them. Let me use this
opportunity to thank members of the Rivers State House of Assembly for their support all through the crisis. I did not give them money to stand by me. I commend them for their sacrifice,” he said.

He explained that the Resident ElectoralvCommissioner in the state, Mrs. Gesila Khan, had not given the APC the voter register, which the Independent National Electoral Commission used in conducting the last general elections in the state.

Earlier, the Catholic Bishop, Etokudoh, had congratulated Wike for his electoral victory and urged him and Amaechi to settle their differences.